This is a perfect busy-day recipe. You put it together in just a few minutes, then let it cook all day.

Season the meat on all sides. Place in slow cooker and pour broth over it. Cook on HIGH for 1 hour, then turn down to LOW for about 7 to 8 hours.

Trim fat off the meat and cut into a few chunks, then shred with 2 forks OR if you have a stand mixer, try this really easy way: Put chunks of meat into the mixer. Using the paddle attachment, spin it a few times on LOW. Rearrange the contents of the bowl and spin a few more times. Watch carefully as there's a fine line between shredded and pureed.

(Hat tip to Gluten Free Homemaker for the stand-mixer idea! It really works!)

Menu Plan most of October 2011 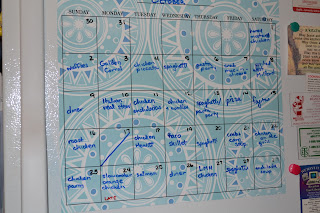 Big Brother came home from college for a few hours yesterday, to grab a winter jacket and reload on homemade cookies and Easy Mac.

For the record, Ranger Cookies still work if you forget to add the Rice Krispies.  (I was wondering why the dough seemed a little different this time.)

When he and his girlfriend showed up, there was much rummaging in the refrigerator for lunch.  That's when they got a look at the calendar on the front of the fridge.  It's where I've been keeping my menu plan.

"Maybe we could eat our dinners here every night," Big Brother's girlfriend sighed.  Best compliment EVER!

There's nothing like Dorm Food to make your kids appreciate Mom's Home Cooking.

Beginning of the month menu plan is here.

Sat 8:  visited my parents & had dinner there

Mon 10:  Italian veal stew (which is apparently on my college student's Dinner Wish List for next time he comes home!)

Mon 17:  ate at the Irish Pub (if you're local, don't miss the Guinness Beef Stew over mashed potatoes)

Sun 30:  Italian Beef Sandwiches (With back-to-back rehearsals from 1 to 7 PM, I needed a trusty slow-cooker recipe for Sunday and this is perfect)

The plan for Halloween is still up in the air.  A lot depends on what time trick-or-treat is going to start.

Otherwise known as:  how much can YOU fit into a Priority Mail Flat-Rate box? 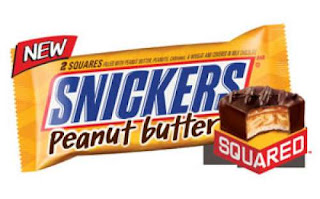 I just boxed up a Halloween-treat package for Big Brother, who's in college.  I used a small-size Priority Mail Flat-Rate box, which is about the size of a trade paperback book (approximately 5X8X1.5)

It would probably be cheaper for me to just drive over and drop off a bag of treats, but there's nothing like getting a package in the mail.

I cannot believe how easy this is!  3 ingredients and 5 minutes are all you need for a delicious side dish. 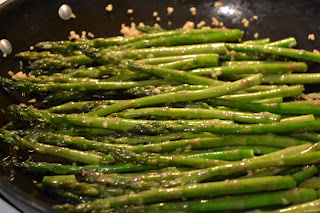 Carefully rinse your fresh asparagus spears earlier in the day and leave them in a colander to dry, or gently pat dry with a paper towel.

Email ThisBlogThis!Share to TwitterShare to FacebookShare to Pinterest
Labels: Quick and Easy, Side Dish, Vegetable

Sometimes things just don't go as planned.  Fortunately, this bread was goof-proof at a time when I really needed it to be!

I was assigned Dinners, Dishes and Desserts as my Secret Recipe Club blog for October.  Oh, the desserts!  I think I gained 5 pounds just looking at the pictures.  A few recipes are bookmarked for future taste-testing, like Cinnamon Roll Muffins--wouldn't those be a delicious breakfast treat?  Erin has recipes for all sorts of tasty treats, as well as some main-dish recipes too. 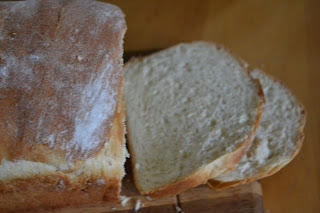 It was hard to choose, but my decision was made when I saw the recipe for Honey-Oat Bread.  I've got a toast eater in this house, and I was hoping to find a good bread recipe that would make great breakfast toast--to get him off the store-brand white bread he usually eats.  This bread has a healthy dose of oatmeal, plus a touch of sweetness from the honey.  We all liked it so much, there was barely any left for toast the next morning after we ate most of one loaf with dinner and shared the other with a neighbor.

This is some beautiful bread!

Here's the part where things didn't go as planned:  I made the dough in the bread machine, and I was really distracted when I put it all together.  (So distracted, in fact, that I dumped the yeast in with the water and other liquids--usually bread machine recipes call for the yeast to go in last, on top of the dry ingredients!)  I was also so distracted that I didn't pay attention to the part where the beaten egg is used as a wash for the tops of the loaves.  I tossed that right in to the bread machine as well.  Then I realized what I'd done, but I figured, what the heck--I'll bake it and see what I get.

2 hours later the dough cycle was done and the dough was JUST at the top of the pan.  It looked and felt just like bread dough is supposed to; slightly tacky, a little lumpy from the oatmeal (I only had old-fashioned oats).  I divided it into 2 loaves, rolled up the dough and put in greased loaf pans.

So here's the recipe as I made it (the original recipe can be found here): 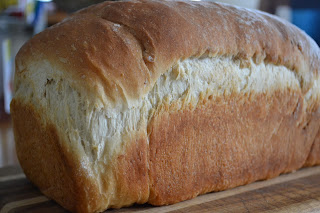 Add ingredients to your bread machine pan in order recommended by the manufacturer.  Select the dough cycle.  When the cycle is done, remove bread to a floured surface and divide into two portions.  Pat or roll into a rectangle, then roll tightly and place in two greased loaf pans.  Allow to rise 1 hour.  Bake at 350 for 35 to 40 minutes. 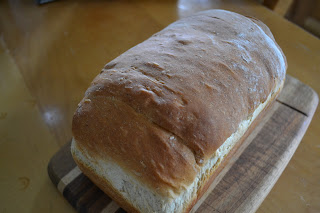 Thanks, Erin, for this recipe for a delicious bread that went as well with dinner as it did with breakfast!  This one is a keeper for sure. 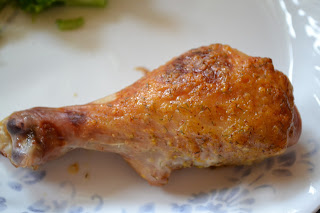 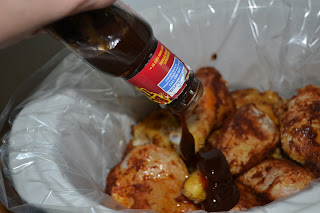 September was a crazy month!  Big Brother was back at school and I was still getting used to cooking for only 4 again.  Both kids are busy with soccer, and they were also both involved in a musical at the community theatre.  It was rare that all 4 of us still at home got to eat all together--and I didn't want to have to resort to dining out too often.  I wound up doing that more than I cared to, but we did manage to eat at home MOST nights.

Sun 11:  potluck at the theatre.  We brought baked ziti with meat.

Quiche for One: It's What's for Lunch

Real men might not eat quiche, but I love it as a quick, high-protein lunch.  This recipe is NOT low in fat, but it sure is delicious.  It's a twist on a full-size quiche recipe that my mom's been making since quiche (quiches?) were fashionable in the '80s. 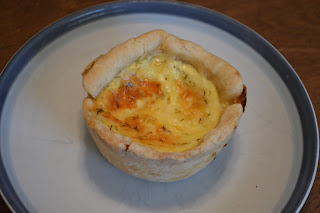