This soup got started as the Corn Chowder recipe from 365 Slow Cooker Suppers. That chowder needed something, so I decided it spice it up with some Ro-Tel (and omitted the potatoes). You can make this chowder as chunky or smooth as you would like, as there's a blender step in the instructions. The more soup you reserve before blending, the chunkier the chowder will be. This freezes well. 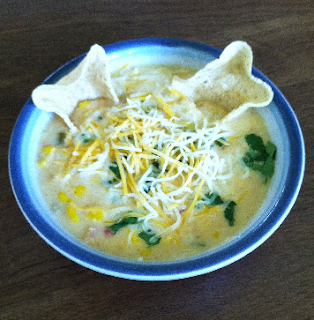 For this recipe, including nutrition information, please see my new website at Cook and Count!
Posted by Barb Szyszkiewicz at 10/26/2013 02:26:00 PM No comments: 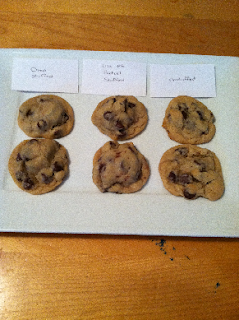 Whether your tastes lean toward the super-sweet, the sweet-and-salty, or the traditional, these chocolate-chip cookies are for you! I started out with a basic recipe from Amanda's Cookin' but made a few changes in the prep so the cookies could be stuffed. You can stuff a cookie with all kinds of things, like caramels, pretzels, and mini Oreos. I like to use small items to stuff cookies, so that the cookies themselves don't get TOO big. 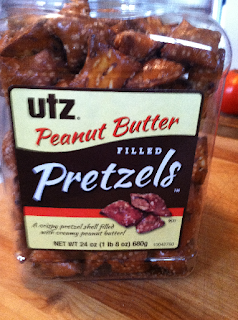 My younger son's friend requested a batch of my Oreo-Stuffed Chocolate-Chip Cookies for his birthday, but he wanted a softer cookie. I think this recipe did the trick. After I'd baked 3 pans of cookies stuffed with mini Oreos, I decided to try adding peanut-butter-filled pretzels to a different batch. These new filled pretzels from Utz were just the right size--and they kept their crunchy, salty texture even after baking. Finally, I baked a pan of just plain cookies.

When it comes to cooking, I'm generally fairly adventurous--except when it comes to using the slow cooker. For as much countertop real estate that my slow cooker takes up, it's definitely underutilized. Mainly, I use it for pot roasts, pulled-meat sandwich fillings, and chili. 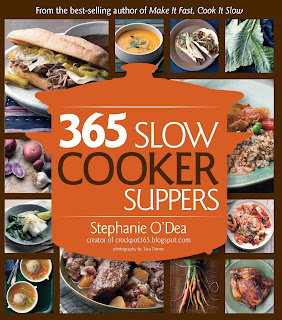 Stephanie O'Dea is a lot less cautious than I am when it comes to slow cooking. Besides her website, where I learned to make a mean pork carnitas, she's published several cookbooks that help hesitant cooks like myself get over the idea that there are only a few types of foods that can be prepared in a slow cooker.

Her new cookbook, 365 Slow Cooker Suppers, shows that the possibilities for slow-cooker use are much less limited than most of us think. I marked many recipes I'd like to try, and even made one of them immediately: corn chowder. That's something I really enjoy and something I'd never considered cooking in a slow cooker.

If you read through many of the recipes, you'll discover that there are several variations on a base recipe--just with a different set of seasonings or group of vegetables. Once I noticed that, I felt more confident about fiddling with a recipe on my own to adjust it to my family's tastes--again, something I'll do with a stove-top recipe without thinking twice about it.

One thing I like about O'Dea's cookbooks is the "Verdict" at the bottom of each recipe. In that short paragraph, she explains how the recipe can be varied to suit picky discriminating taste buds as well as what her family liked about each dish.

I felt that there was a lot of emphasis on gluten-free this or that. While I don't mean to slight anyone who must follow a gluten-free diet due to medical necessity, I think there are less-intrusive ways to indicate this in a cookbook. There were recipes that contained the parenthetical "(I use gluten-free insert name of ingredient)" several times. After a while, I started to feel that because I don't have gluten intolerance, I'm not the target market for this cookbook. I doubt that this is what the author intended. I'd suggest, instead, listing gluten-free substitutions at the bottom of a recipe or denoting gluten-free ingredients with a GF icon next to the name of the ingredient. Because most of these recipes don't include a long list of steps to be followed in preparation, there's plenty of room on the page to find another way to indicate when gluten-free ingredients can be used.

The fine print:  I was provided with an electronic copy of this cookbook for the purposes of this review. All opinions are mine alone, and I was given no other compensation for my review.

I like Spanish food, and since yesterday was a feast day with a particularly Spanish connection, this was our dinner last night: 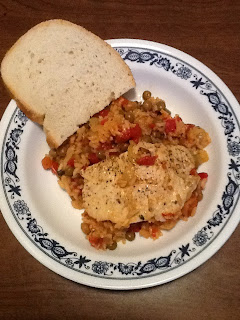 With apologies to every Spanish cook, I took liberties with the Arroz con Pollo. Part of this was because I didn't have some ingredients in the house; part of it was due to personal preference. So it might not have been authentic, but it tasted really good! BONUS:  it's a one-pot meal, so the cleanup was easy.