A shrimp dinner is definitely an extravagance, so I only buy shrimp when it's on sale. I also make the meal stretch by serving lots of vegetables or pasta with it so that no one's tempted to inhale an entire pound of shrimp. If you're buying medium shrimp (51/60 per pound) then a dozen shrimp per person is a good rule of thumb.

One of the standbys in my freezer is a bag or two of individually quick-frozen shrimp. I like to keep both raw and cooked shrimp around for quick dinners. When you use precooked shrimp, as in this recipe, you only need to thaw it, then warm it up. I started the rice, then cut and steamed the broccoli, then got to work on the shrimp--and was still waiting a couple of minutes for the rice to be done.

This was fairly spicy, so if that's a deal-breaker, skip the crushed red pepper.

Get the recipe with photo and nutrition facts at Cook and Count!

That's pretty much what I spend now, though I do have a well-stocked pantry and freezer. I buy groceries on sale, and I don't buy too many prepared foods (except for breakfast cereals, frozen pizza and granola bars.)

That's also pretty much what Big Brother spends on groceries during the school year, when he lives in a college apartment and cooks for himself. Believe me, he eats well:  jambalaya is regularly on the menu--made from scratch. The spice collection he brought home from school this summer is too large for a shoebox that used to hold men's sneakers.

In a Twitter discussion, I was criticized for claiming that the reason I can live on (or close to) a SNAP budget is that I buy ingredients, not prepared foods.

My response:  "Understood. But don't sell people short by assuming all they can handle is nutritionally empty prepared foods."

She didn't answer me.

Cooking does take time, but it's faster to cook burgers on your own stove than it is to go to a drive-through, order them, and bring them home. Rice cooks in 20 to 25 minutes. It costs me under $15 to make enough homemade spaghetti sauce and meatballs to feed a family of 5 for 8 dinners. That's less than 40 cents per person per serving. That spaghetti sauce needs to cook a minimum of 4 hours, one time. After that, the sauce and meatballs heat up in the same amount of time as it takes to cook the pasta. 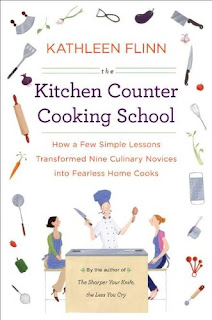 Big Brother learned that staying on a food budget is easier if you plan ahead, eat what's on sale, and shop at Bottom Dollar and ALDI. He doesn't use coupons.

Ingredients are cheaper and healthier than prepared foods, on the whole. Earlier this year I read Kathleen Flinn's The Kitchen Counter Cooking School. The author helped nine "culinary novices" reshape the way they cook and feed their families. The students learned how to prepare foods with fresh ingredients and how to use planned leftovers.

Change doesn't happen overnight, but there's no reason that anyone with even the most basic kitchen equipment (sink, stove, fridge, skillet, 2 saucepans and a colander) couldn't learn to make some homemade, nutritious food rather than reaching for the (high in sodium and sugar) Ragu on pasta night.
Posted by Barb Szyszkiewicz at 6/25/2013 03:53:00 PM No comments:

Email ThisBlogThis!Share to TwitterShare to FacebookShare to Pinterest
Labels: Budget

Chicken with Tomatoes, Fennel and Basil

This dinner tasted (and smelled) restaurant-quality. It is based on Amanda's Spiced Chicken and Mezzi Rigatoni, with a few changes. Total cook time is 35 to 40 minutes, unless you have an enormous pan to cook the chicken. I had to do the cooking in batches so the chicken would saute instead of steaming. 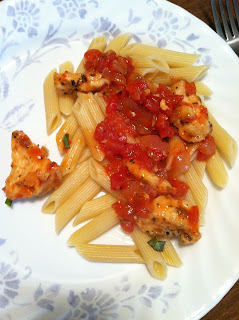