Tonight at Shop-Rite I discovered why it's a good idea to save that little printout you get when you use the "Dexter Deli" machine to order cold cuts.

There was a coupon in this week's circular for Shop-Rite American cheese, making it $2.98 a pound (a $1.01 saving).  I needed some American cheese, since we're having a picnic tomorrow evening for the Cub Scout leaders and their families to kick off the new year.   So I ordered a pound of American from the deli computer.

When I picked up the cheese, I noticed that they had marked "out" next to the roast beef I had also ordered (it was also on sale this week).  I looked around for a trash can to throw away my little printout, since I had matched up the order numbers, but I didn't find one, so I put it in my pocket and headed to the checkout counter.

The cashier rang up the cheese, but the coupon I handed her didn't work.  She asked me to unpack the cheese from my bag so she could check it--and then she told me that it was the wrong cheese and I couldn't get the coupon price.  I then pulled out my receipt, showed her that the orders matched, and the manager said that I should pay the sale price since it was not my error.  (The manager then headed over to the deli counter, where I imagine the person manning the slicer would hear about it.)

I just checked--that was $6.49-a-pound cheese they gave me by mistake.  UNfortunately, it was "slender" cheese which probably means it doesn't taste or melt quite the same as regular cheese does.  But that's what I have; I'm not going back to the store tomorrow; we're eating it on the burgers tomorrow.

Email ThisBlogThis!Share to TwitterShare to FacebookShare to Pinterest
Labels: Shopping

Visit Cook and Count to see this recipe!

Email ThisBlogThis!Share to TwitterShare to FacebookShare to Pinterest
Labels: Chicken

This is "what's for dinner" tonight and it was SO delicious--and very easy.  Middle Sister didn't even notice the soy sauce. 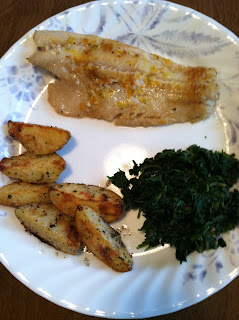 Bake 15 minutes or until done. Drizzle sauce over fish.

Email ThisBlogThis!Share to TwitterShare to FacebookShare to Pinterest
Labels: Fish

Tonight for dinner I'm making Barbara's recipe for Italian Roast Beef Sandwiches. I browned the meat in a heavy pan on the stovetop and then transferred it and the broth and onions to my crockpot and cooked on high for 3 hours. I skipped the green peppers because my people are just not so fond of those.

I was doing just fine until I grabbed the cutting board and the meat fork so I could take the roast out to settle before slicing it. The fork's handle bent, dropping the roast back into the crockpot full of spicy au jus, which flew all over the wall behind the crockpot and ran down to the floor.

I sorted that out and cleaned up the mess, then sliced the roast and prepared to return it to the crockpot. As soon as all the meat was in there and the lid was on it, I went to pick up the cutting board so I could put it in the dishwasher, and it tipped over, pouring all the accumulated juice and little scraps down my shins, onto my shoes and socks, and onto the floor.

This recipe had better be good for all the trouble it has been today!