Every cook has one of those dishes that they want to make, and they try, try, try every recipe they can find (and some they make up).  They waste batch after batch of ingredients on not-quite-right results, but chances are they never completely give up.  And sometimes they happen upon just the right recipe.

I think I've been trying for about 20 years to make the sweet corn casserole like what was served at the Chi-Chi's restaurant my husband and I used to visit.  It was so good...whenever I was offered two sides, I'd just get double the corn casserole.  But no matter how many recipes I tried (and there were many--very many, which is why Big Brother is no fan of corn to this day) I couldn't get it right.

Today I followed a link in a tweet by CatholicFoodie to this recipe for Easy Corn Casserole.  I almost didn't try it, figuring I'd once again be disappointed.  Then I decided that if I had all the ingredients on hand, I'd make it with dinner tonight.

I used a Corning-ware baking dish, and I found that 45 minutes were needed to bake it all the way through.  5 more minutes probably wouldn't have hurt either, and it's a good idea to let it set for 5 or 10 minutes after removing it from the oven.  But oh, my, this is good--and just exactly what I was after (I knew that all those recipes calling for sour cream weren't going to lead me to the right result!)

Thanks, FamilyFoodie, for sharing your friend Charlie's recipe for my favorite corn dish!
Posted by Barb Szyszkiewicz at 7/21/2012 07:19:00 PM 1 comment:

Email ThisBlogThis!Share to TwitterShare to FacebookShare to Pinterest
Labels: corn, Side Dish, side dishes

I have this recipe clipping from a 1998 issue of Better Homes & Gardens for "Spectacular Cinnamon-Almond Ring."  Honestly, there are very few recipes of mine that I'd include an adjective like "spectacular" for, but BH&G apparently thought this was pretty special.  It's a cinnamon-swirl yeast bread that is baked in a fluted tube pan, and is designed to be refrigerator-raised overnight.  I've made it several times, and the results are delicious, but it is pretty work-intensive.  Recently I'd been thinking about making this recipe in regular loaf pans, so that's what I tried today.  Instead of a refrigerator rise, I mixed the dough in my trusty dough machine (I'd call it a bread machine, but I never actually bake any bread in it.  I prefer baking it in the oven in a pan that is not tall and square and does not leave a big hole in the bottom of the loaf.) 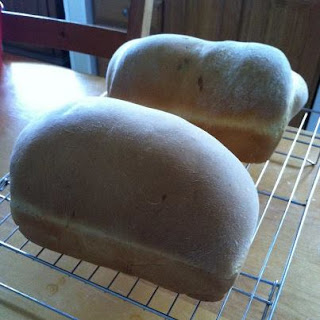 The original recipe did not call for bread flour, but all-purpose.  I didn't add any gluten, either--wanted to see what would happen if I left it alone.  As it turned out, no gluten was needed, and AP flour worked fine.

Add ingredients to your bread machine in the order recommended by the manufacturer.  Select dough cycle. 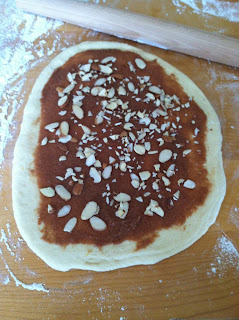 Divide the dough in two pieces on a floured surface and roll thin.  Mix butter, sugar and cinnamon and spread on dough, leaving a 1-inch margin.  Sprinkle with almonds.  Roll tightly and place in greased loaf pans.

MAKE SURE you roll this very tightly, as otherwise there will be huge air pockets inside the bread.  This makes slicing and toasting a little difficult, though there's no impact on flavor.

NEXT TIME I will divide this recipe into 3 loaves instead of 2.  That might have kept things more manageable!