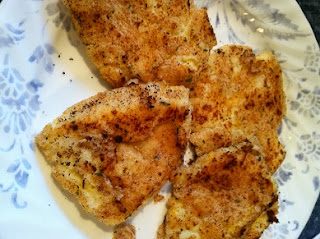 I used a 2-burner griddle to make this go faster. This recipe made about 15 potato cakes.

Mix potatoes, egg, cheese and seasonings (not bread crumbs) in a large bowl. Form into patties and dredge in the bread crumbs. They don't have to be completely coated. Fry on a heated, oiled griddle until brown on both sides. Keep warm in the oven until all the cakes are done.

Note:  these are even better when you use a good sharp Cheddar. They're not the prettiest side dish in the world, but they're very tasty.
Posted by Barb Szyszkiewicz at 3/28/2009 01:40:00 PM 2 comments:

TUESDAY: Maple-mustard pork ribs in the slow cooker (a new recipe. Not so great.)

THURSDAY: Chick-Fil-A (yeah, I got lazy)

We have more common sense than magazines think

I was flipping through an old issue of All You magazine and found a recipe for side-dish potatoes that I thought I might try.

I had to love the "kitchen tips" that went along with the recipe, though.

Work in advance. You can make the potatoes through step 2 up to a day ahead (don't preheat the oven). Cover and refrigerate the potatoes. The day of the party, pipe and bake the potatoes, allowing an extra 5 minutes of baking time.

Did they honestly think that they had to warn someone not to preheat the oven if you were preparing this recipe ahead of time? How clueless do they think their readers are?

Email ThisBlogThis!Share to TwitterShare to FacebookShare to Pinterest
Labels: Magazines

Here's what we ate for dinner last week.

MON 16: chicken lo mein (was supposed to be something else, but 2 of Big Brother's friends were still here so I needed something I could expand!)

WED 18: New England Boiled Dinner because I refuse to serve corned beef on St. Patrick's Day just out of spite. It's not an Irish meal!

FRI 20: I want to try this meatless paella

My latest effort in sourdough breadmaking is enough like Cracker Barrel's bread that I won't need to buy theirs anymore.

This is a bread machine recipe.

About 8 hours before you want to bake, take your starter out of the refrigerator and toss a pinch of sugar in there, and then stir. Cover loosely. Stir the starter again just before using it.

Put in your bread machine pan:

Use the dough cycle. Shape the dough and place in an oiled loaf pan. Allow to rise at least 2 hours.

Thrifty Thursday is hosted at Amanda's Cookin' each week!

I made a turkey dinner on Saturday for my younger son's birthday. After I carved the turkey, I let the carcass cool off, then broke it apart. You can do this with your hands once the carcass gets cool. Then I saved it in a covered pot in the refrigerator.

Today I took all of those pieces and put them into the strainer insert for a 12-quart pasta pot (it's like a colander, but cylindrical). I added a bag of "past their prime" baby carrots, a handful of parsley, and some salt and pepper. Then I filled the pot with water and simmered 4 hours.

After that it was easy enough to remove the strainer and I was left with over 8 quarts of fabulous turkey stock. Some of it went into the white chili we had for dinner, and the rest is for the freezer. (We used cubed leftover turkey in that chili instead of chicken. It tasted great.) 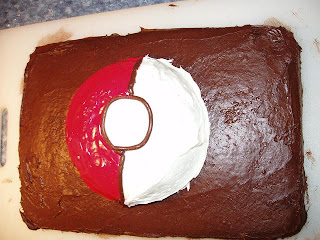 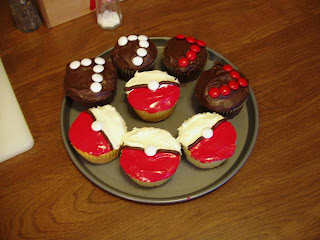 For Little Brother's birthday I made a Pokeball cake and cupcakes. These were really easy and required a minimum of decorating skill. That's good, because I was not feeling super-well, so I wasn't up to a big challenge.

You need:
3 cans frosting (one chocolate, 2 white)
2 cake mixes, prepared as directed
1 bag Valentine M&Ms (you need red and white M&Ms. Well, actually only white ones, unless you are using red to put numbers on some of the cakes like I did. You get to eat all the pink ones.) If you don't have white M&Ms, get some little gumdrops and use the white ones. Or white chocolate chips, upside-down, would work too.
Icing bag and frosting tip (I used a #3 tip, I think.)
1/2 bottle red food coloring (not those wimpy little vials that come in packs of 4. A BOTTLE.)

I baked 24 cupcakes, 1 9X13 and 1 "dome" in a small Pyrex dish. The batter for that came out of the 9X13 batch. I'm not the biggest fan of baking spray (usually I use solid shortening and flour for cakes) but I had a free can of Bakers Joy and this stuff was fabulous in the Pyrex.

The 9X13 was frosted in chocolate (Middle Sister did that part) and then I put the "dome" on top of that.

Then I mixed up my red frosting. Note: if tinting an entire can of frosting, use a mixing bowl. Don't try to mix it in the can. My table is still a little pink in spots. I did the whole can because there will be another party soon and this way I wouldn't have to mix colors again. I used half a bottle of red coloring for the whole can. The color WILL get more intense over time; when I finished mixing it, it still looked a bit pinkish. So does my thumb, come to think of it.

Put a little of the chocolate frosting into the icing bag for trimming out the Pokeballs.

ALMOST half of each cupcake, and half the dome, should be red. I left a little semicircle uncovered and then did that part in white. Next time I will do the white part first...live and learn.

Trim it with the chocolate and then top with the white M&M.

Last week I forgot to do the menu plan. Here's what we ate.

TUESDAY: Taco mac & cheese. The mac part was great & everyone wants it as a standalone dish. I will post that recipe later.

SUNDAY it will just be the kids as we are going to a church dinner for the parish volunteers.

I have a good amount of leftover turkey including the carcass, so there will be turkey soup happening sometime this week--or at least turkey stock.

I had an unfortunate, inadvertent freezing-of-the-red-bell-peppers that should have been on the vegetable platter for today's dinner. They're sliced but no good for eating raw or stir-frying. They'll be fine for chili or something else like that. So I need to either figure out a way to cook them in something this week, or just freeze them until I think of what to make with them. Maybe they'll be good in the Crockpot Jambalaya recipe I found on Family Corner.

Unfortunately, cucumbers that have been inadvertently frozen are not good for anything, as far as I can tell. Ick. Ever try to peel a partially-frozen cuke? I don't recommend it.
Posted by Barb Szyszkiewicz at 3/07/2009 09:18:00 PM No comments:

Today's Thrifty Thursday tip is a turkey tip! Yes, I know it's not Thanksgiving, but my kids all love turkey, and I'll be making one this weekend.

You don't have to buy an expensive turkey to get a moist, juicy bird. Here's an easy way to get great results on the cheap. BUT it takes a little planning ahead, because the bird has to be completely thawed a whole day before you want to roast it.

1. Go to your nearest Big Box Home Improvement Store (orange or blue, doesn't matter) and buy a 5-gallon bucket with a lid. Wash it out.

4. Wash the turkey inside and out and make sure you remove all the giblets and other miscellaneous-in-a-bag that comes with the turkey.

5. Put the turkey in the 5-gallon bucket with the tips of the legs sticking up.

6. Sprinkle a cup of kosher (coarse) salt all over the turkey.

7. Pour water over the whole thing and keep adding water until the cavity is filled and there's plenty of water on the outside of the turkey too. Add lots of ice cubes, and cover.

9. Remove directly to your roasting pan. Don't wash the turkey again. It was clean before you did the brining part.

Now if you want to get all complicated, Alton Brown does a brined turkey with lots of spices and stuff. But unless you have all of those in your house already, it's not a thrifty turkey. This way works just as well.
Posted by Barb Szyszkiewicz at 3/05/2009 08:08:00 AM 2 comments: