It's the March Madness Edition of the Secret Recipe Club!  In this group, each member is secretly assigned the recipe blog of another member.  The recipe is then prepared and taste-tested, photographed for cyber-posterity and posted.  It's fun to try new recipes, and I'm lucky to have a family that's generally good-natured about such experiments.

Of course, if I left the choosing to the kids, they'd pick cookies every time.  While cookies are fun, I like finding new main-dish recipes too.  So even though my assigned blog for March is really heavy on cookies, I focused on the non-dessert offerings at Sweetie Pettiti.  But that doesn't mean I didn't find a "fun" recipe! 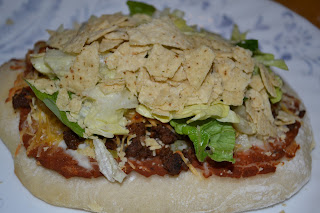 Susie worked hard to duplicate her childhood favorite, Happy Joe's Taco Pizza.  She had to find a recipe that lived up to her high nostalgic expectations.  I had no such expectations, since I never ate at Happy Joe's.  The idea of Taco Pizza was appealing, though--and I figured my family would love it.  And salad on a pizza sounded fun, different, and even (imagine that) good for you!

Changes I made:
Instead of one huge pizza, I made individual ones.  This allowed each family member to customize their Taco Pizza.  If your kids like to help in the kitchen, this is an ideal recipe.  Once the ingredients are all assembled, kids can spread their favorite toppings on their pizza, then the grownups can bake it until done.
I also added sauteed onions as a topping.  (YUM!)
I had no tomatoes in the house, so I skipped those.  This is not the time of year for tomatoes.  In the summer, though, I'd have to add them!
I made my own pizza dough based on the recipe at Once a Month Mom rather than using premade dough.
Finally, I made a meatless pizza for my daughter, at her request.

Survey Says:
This is a yummy dish!  It would be a fun meal to have while you're watching a little March Madness--just be sure to have plenty of napkins handy, because (as Susie pointed out in the original recipe) the toppings fall all over the place.  It was easy to customize to individual tastes.  My daughter had a meatless pizza.  My husband ate his salad separately and spread sour cream on top.  It's also frugal:  I used up some pizza sauce and refried beans that were already in the refrigerator, so it's a good way to reinvent some leftovers.  I found that it was easier to "fold" this pizza like a huge taco and eat it that way rather than slicing and lifting little pieces of it.

Here's how to make this at home:

Season cooked ground beef with taco seasoning.  Add water and simmer until water cooks off.  Meanwhile, mix refried beans, taco sauce and pizza sauce.  (I found that heating the beans in the microwave for about a minute made them easier to mix up with the other ingredients).  Spread bean mixture on your par-baked pizza crusts.

Top with mozzarella cheese, then with seasoned taco meat.

Add onions, then cheddar-jack.  Bake at 450 for 8 to 10 minutes, until cheese is melted and crust is golden brown on the edges.

Allow pizza to sit a few minutes before you try to slice or eat it.  Then top with salad and chips.

Grab a napkin or three, and dig in!

Don't miss the other recipes in today's Secret Recipe Club big reveal.  I always find a whole bunch that I want to taste-test!
Posted by Barb Szyszkiewicz at 3/05/2012 12:00:00 PM